600 UK will have a significant presence on four separate stands at MACH 2014. Alongside fellow 600 Group company Electrox, this will total over 150 square metres at the Birmingham NEC show from 7 to 11 April 2014. 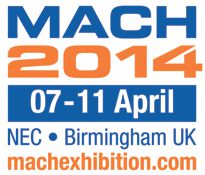 The new, highly accurate modular built Tornado CNC turning centre will be exhibited alongside the hugely popular Alpha XS manual/CNC lathe, with models that can accommodate spindle bores up to 380mm and component lengths of 6 metres with C-axis capability to handle larger, more complex, components.  Colchester and Harrison’s industry standard, superior specification conventional lathe range will complete the line-up of lathes at MACH 2014.

Also showing in its first official UK launch will be the increasingly popular new ‘Gripfast’ Combination Power Chuck from Pratt Burnerd International that was launched successfully at EMO Hannover and is quickly becoming a huge time saver for many customers.  The Gripfast Chuck provides CNC lathe customers with a chuck, a collet chuck and a mandrel chuck combined into one unit, and features both the ‘Setrite’ and auto-compensation features as standard, thus increasing productivity and minimising non-machining time through instant set-up changes for medium to small batch production runs.

Furthermore, 600 UK in partnership with Southern UK distributor, RK International have space in the Education and Training Zone (stand 4766 in Hall 4), where the world’s best selling manual centre lathe, the Colchester Student will appear alongside the Europa Milltech turret mill range.

Both products are hugely popular with customers from industry and educational establishments and the Europa Mill is the first new machine of its type to be fitted with a high level Heidenhain TNC320 control system, giving manual and CNC control over 3 axes. Both these machines are ideally suited to exhibit in the Education & Training Zone in Hall 4 (stand 4766).

RK International will themselves, be showing a ROBBI 600R T6 semi-automatic universal grinding machine along with presentations on other machines from its portfolio, which includes technologies such as super finishing, turning, machining centres and honing on stand 5960.

Another 600 UK partner, John Walton Machine Tools will also be exhibiting a wide range of workholding products, including Pratt Burnerd chucks and collet chucks on their stand 5013.

600 UK Sales Director, Howard Bamforth said ‘600 UK are proud to be part of MACH 2014 where customers will be able to see our latest UK manufactured products, direct from our Heckmondwike, West Yorkshire factory on all of our stands’.