When Gamet Bearings recently had a manufacturing headache, they automatically turned to their 600 Group sister company, Pratt Burnerd International who design and manufacture manual and power chucking systems at their factory in West Yorkshire, England. 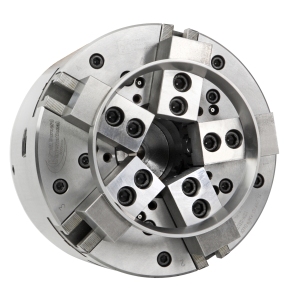 Pratt Burnerd not only supply standard products, but their huge knowledge and unrivalled expertise, developed from over 150 years workholding experience, comes into its own with highly specialised chucking solutions.

Gamet have been manufacturing super precision tapered roller bearings in Colchester, England for 60 years, which range in size from 25mm to over 500mm I/D, in single and double row configurations, to radial run-out tolerances as low as 0.5 microns (0.0005mm).

Within Gamet’s range of ultra high precision bearings, there are a number of ‘Thin Section’ components that are prone to distortion when being held in place by conventional 3-Jaw power chucking systems.

This 5 Jaw Gripfast chuck provides a significantly greater support area than a conventional 3-jaw chuck, being designed specifically to wrap-around a component far more effectively. In addition, the design ensures the non-opposing jaws on the 5-jaw model provide a more even pressure on the manufactured components’ surface area than is possible with a 3-jaw alternative.

As Alan Jenkin explains “Traditionally, chuck manufacturers supplied 6 jaw chucks to handle thin walled components, which technically gives over a 20 times better ‘out-of-roundness’ measurement, when compared to equivalent 3 jaw chucks. Pratt Burnerd, with the 5-jaw design have further developed this idea, as by having no opposing jaws, we have significantly improved this ‘out-of-roundness’ measurement, over and above even the 6 jaw alternative.

This concept has been fully proven as, since the chucks installation, Gamet have benefitted from greatly reduced distortion on thin section rings up to 330mm diameter. As Tony Tankard, Gamet’s manufacturing director explains “This has improved our production efficiency significantly by reducing material allowances for subsequent operations, reducing scrap and overall manufacturing costs - which ultimately improves the overall quality of the Gamet product. Naturally, being part of the 600 Group has given us access to specific expertise that has helped us operationally.”

Howard Bamforth, 600 UK sales director said, “This is another great example where combining our skills in very different manufacturing environments can enable us to provide a highly technical solution. Our unrivalled expertise is available to all customers who require something out of the ordinary, when looking for workholding and chucking systems. The new 5 jaw Gripfast chuck can be seen at MACH 2016 on the Pratt Burnerd stand 4501, in Hall 4.”